Burns, K. J. and A. J. Shultz. 2012. Widespread cryptic dichromatism and ultraviolet reflectance in the largest radiation of Neotropical songbirds: implications of accounting for avian vision in the study of plumage evolution. The Auk 129: 211-221. pdf

We just had a new paper published in The Auk, representing a collaboration between Burns and recent graduate student Allison Shultz. In this study, we used a spectrometer to quantify plumage in the cardinals and tanagers, which together make up the largest radiation of Neotropical songbirds. We found that almost half of the species have ultraviolet coloration in their plumage. This is coloration that birds can see, but humans and other mammals are unable to detect. Also, 97% of the birds appear sexually dichromatic to birds even though only about half look sexually dichromatic to humans. Therefore, we found many examples of species where males and females look different to birds, but seem identical to humans. Our paper was picked by the editor of The Auk as an Editor’s Choice.

Update: this article ended up being the most downloaded article in The Auk for 2012! 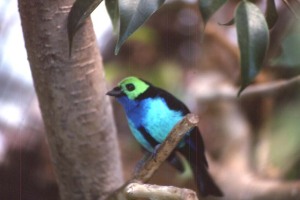 The Paradise Tanager (Tangara chilensis) is one of the most colorful tanagers. Is this a male or female? Humans can’t tell, but birds can.